How to create a culture of accountability Accountability is a choice.

You can hold people accountable, but they will find excuses and won't take responsibility if they don't want to be held to a standard. So, as a leader, you want to create an environment where people will naturally be open, share their actions, commit to their goals and make the right decisions.

Forcing upon reluctant people tactics and practices to instill transparency will result in a hostile and resistant culture.

And resistant cultures never execute strategic plans that oppose them. 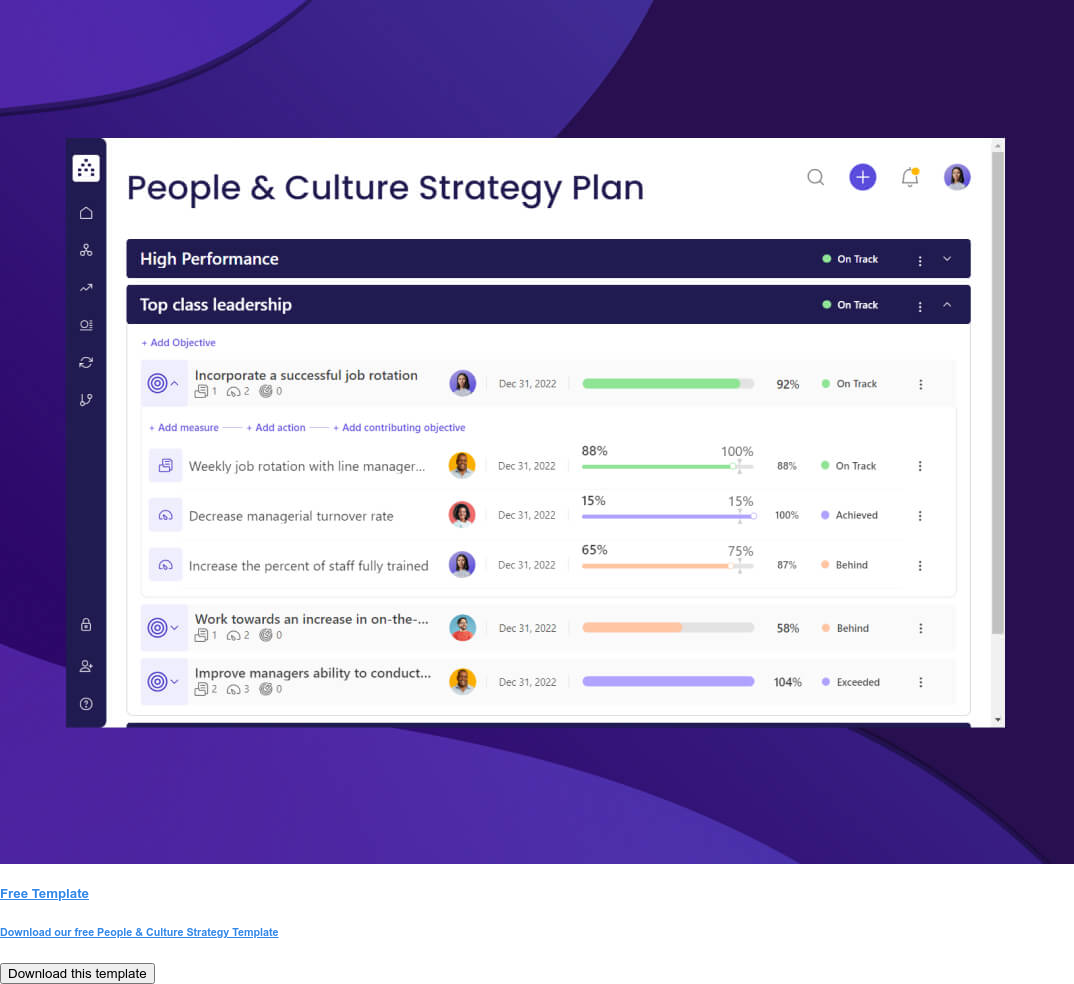 What is a culture of accountability?

In a culture of accountability, people take responsibility for their actions (or lack thereof) but are judged based on their decisions. For example, an employee might break an organization's rule to avoid escalating a dispute in the process. In that situation, it's fair for the leaders to judge whether the decision was correct rather than punish the action disregarding the context.

Why it's important to build a culture of accountability

Because it reinforces trust.

Accountable people are trustworthy because they are predictable. When assigned a goal or a task, everyone knows that they will either complete it or raise their concerns early on.

People ditch the victim mentality and assume responsibility for the goals and metrics they are tasked with achieving. Nobody wants to show up to a team meeting and be the one who hasn't accomplished their goal or lagged way behind. When people feel accountable to their boss and their fellow team members, they are more likely to rise to the team's standards. They own their mistakes and obstacles instead of making up excuses. As a result, their performance improves.

Consequently, the team's performance improves. A culture of accountability forces people to reveal important obstacles and blockers early on to get the support they need to overcome them. As a result, progress is achieved and no surprises come up when it's too late to deal with them.

A culture of accountability drives execution.

How to build a culture of accountability

To instill the value of accountability in a culture is to transform it.

Change is hard, let alone a transformative change. It takes a lot of work, time and commitment, but it's not impossible. Below we have a few suggestions on how you can start implementing the change in your organization. Your people won't take ownership of their mistakes if they feel like they aren't permitted to fail. Permission to fail is not permission to work less or be careless. It is the acknowledgment that your people are humans, they make mistakes and there are things that are out of their control.

It is permission to experiment, learn and grow.

Giving your people the opportunity to correct their mistakes and move forward allows them to be themselves, express their thoughts and concerns and connect as human beings. Allow your people to fail, to be themselves and be vulnerable, so they have the courage to ask for help. Then, you'll be able to offer your support and help them take care of their responsibilities.

Creating a safe environment doesn't mean people can't fail, but that when they do, they don't feel threatened.

2. Leaders, be accountable to your team

Leaders ought to exemplify that being vulnerable is acceptable.

The leader ought to take the first step and demonstrate the behavior they want their people to adopt. The leader must be the most trustworthy person in the team. Then, their attitude spreads to their team members. However, the leader needs to have a way to "measure trust." That's hard to accomplish in any useful way, but you can set powerful indicators.

Here are a couple of examples to use as metrics:

Each team and organization has a different culture, so choosing the right way to measure whether your people trust each other is not a straightforward process.

Clarity in goals, tasks and expectations is the foundation of accountability.

You can't hold someone accountable for something vague. You can't just ask a salesperson to do "more sales" or a marketer to bring "more leads." You need to be more specific than that. Foster commitment to specific goals and metrics, agree clearly on the expectation and align them with the team's goals and the company's strategy. Use an online tool like Cascade to visualize and demonstrate the correlation between personal goals and your strategic plan.

For example, set for each team and individual 3 levels of goals:

It creates a transparent environment that forces people to be more open about their work and progress. Everybody knows what everybody does. So, now the team holds the person accountable.

Nobody wants to let their fellow team members down.

But here's the catch. Building business transparency in a culture that lacks trust has the reverse effect. People see the attempt as another control measure to "catch them" when doing something wrong. Transparency in a toxic culture breeds more toxicity.

First, you need to build a trusting environment and then make it transparent.

A regular reporting habit is useful for everyone involved.

On the one hand, teams and individuals are offered the opportunity to share their progress, ask clarifying questions, request help and demonstrate what goes well and what is not. On the other hand, management gets a clear view of a project's progress and performance, can correct-course the direction and offer the necessary support to those who need it.

Not all of those meetings need a strict structure. Individual meetings work well with just a few questions, but team reporting meetings need more structure since you don't have the time to get into the details of every single project. Automate the process with KPI templates and decide what you're reporting on ahead of the meeting. Focus on "next steps" and address every insight that came out of your discussions. Finally, write those commitments down to reinforce accountability.

Allow your people to take the initiative and reward the behavior you wish to see. Instead of having your people pass the information upwards and wait for approval, give them the authority to make decisions and resolve the matters they are closest to.

Tell your people to adopt an "ask for forgiveness, not permission" mindset.

If your company's culture doesn't support such a strong bottom-up approach, start with small steps and iteratively work out the boundaries and the authority you can delegate. Of course, authority can be accompanied by policies and guidelines, but people will still make mistakes.

However, it's better to make a few and repairable mistakes than to have handicapped employees.

How leaders act in a culture of accountability

Accountability flows from the top.

Forcing accountability from the bottom builds a distrustful environment. So, how do accountable leaders act?

When something goes wrong, they never blame the team for it. They take full responsibility for the incident or failed goal and if given a chance, they work towards fixing it. In a culture of empowerment and accountability, leaders recognize that people genuinely wish to perform well in their role and when they don't, it's because they lack the proper guidance. Whether that is additional training, more context for their decisions or additional support.

This kind of mindset shifts the focus towards finding a solution addressing the root of the challenge. Maybe the team member has too much on their plate, insufficient experience and training or is better suited for a different position.